While spending the day with my cousin, we both got the delightful opportunity to spend our lunch at the newly opened Potter’s Pasties “restaurant.” It’s rare I get the chance to actually go down to eat at sit-down locations (at least compared to my various Food Truck ramblings of course), so I was very excited to hit it within three days of the opening. 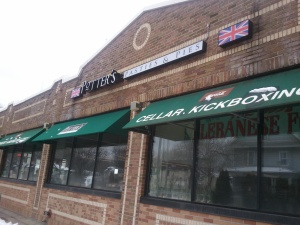 Located in Dinkytown near the intersection of 19th and Como (for those like me who don’t actually frequent that location… memorize the directions. I won’t go into detail about our travel there… it’s too shameful), Potter’s has taken its residence underneath a local convenience store and deli. 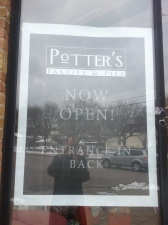 The entrance, as the sign says, is in the back. We didn’t actually notice this at first, so we spent about 5 minutes trying to figure out how to get Potter’s from inside the store… don’t judge us, it was an off day.

Yeah, not exactly hard to miss the entrance once you get back there… Potter’s is sticking to their flamboyant British self. Oh yes, and that’s my cousin… now that I think about it, he sticks his tongue out on almost all the pictures he poses for me. 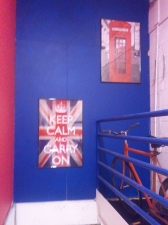 Once in, one heads down a simple staircase, the walls decorated in Potter’s trademark colors and London fare. Now do what the sign says and carry on… 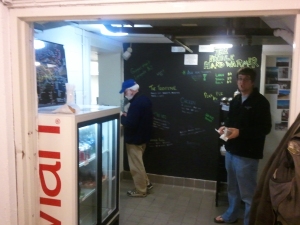 … all the way down to the bottom, where one gets to Potter’s window of excellence. Now, as you saw, they don’t exactly qualify as a restaurant (thus the quotations); they’re a hole, a corner, a little booth in a dark corner (there’s probably a proper term, but I forget it). And you know what? They’re absolutely awesome! 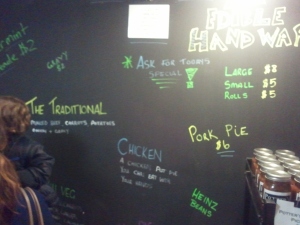 The giant black wall in the back is covered in their menu listings (though for a more mobile way to read, they have some small laminated offerings). Besides the truck regulars, this includes an option for smaller pasties, Pork Pies (held in the Mini-fridge alongside drinks and Yesterday’s Pasties, only $4), and a “Couch Change Pastie” for the monetary challenged. Supposedly this uses puff pastry instead of their regular dough, and is of course smaller. 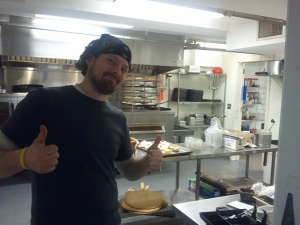 After reviewing the menu with the bandana-covered employee, who graciously pointed out a few features of their awesome kitchen (not to mention stopping for a pose), we made our decisions and got our food, which took about as long as it does in the Truck (in that wait is… well, there is none). 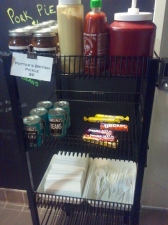 Had to of course stop for napkins and forks before heading up, taking the time to admire Potter’s Rack of Condiments, Heinz Beans, British Candy Bars, and their own Pickle mix, the latter 3 all available for purchase. As for seating, though they currently have none, plans are in the work to bring in tables outside once the weather warms up. For the moment, we took residence in the convenience store (along with a glass bottle each of pure sugar Sprite and Fanta… now that’s quality) and chowed down. 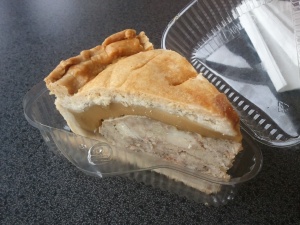 Of course we normally wouldn’t need to sit, but I wanted to try their Pork Pie. Traditional British pastry, the meaty and fatty ground pork is covered in a thick layer of natural gelatin, wrapped in a specially-made pie crust. I was surprised to find they didn’t use the same dough as for their pasties… though I’m not sure if I like it or not. On the one hand, I love the special attention to the pie, but on the other I sorta miss the feeling of using one awesome crust for multiple endeavors. As for the pie as a whole… they say it’s best eaten cold (natural, most traditional English Meat Pies are), but it’s just meh. I seriously suggest taking it home and heating it (in the OVEN, no micro); like that, it’s absolutely fantastic with the rich, meaty gelatin-sauce, toasted crust, and hot pork meat. 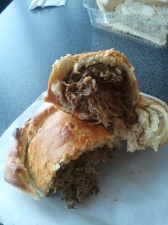 Had to get a Pastie, and for the special today they had a coffee-rubbed Pork with Goat Cheese and Cherry Compote. Again, no reason to go into details, cuz it was just as delicious as always.

Overall, let me just say this. If this place does not become consistently packed with customers after a few months, I will be shocked. This is the kind of unique, special little holes in the wall that any Foodie just goes insane for. There’s an air, a mystery to it, you have to go through a little journey to get there, and at the end you’re just face-to-face with a hole in a wall that dishes out deliciously hot, edible hand-warmers. Ultimately very reminiscent to the same reasons which Marvel Bar has received its own cult following. To tell the truth, I wouldn’t be surprised if this got featured on a Travel Channel or Food Network in the coming years (in fact, if it didn’t, I would be downright pissed).

Potter’s Pasties has created the perfect little outlet for their non-mobile (besides delivery) Food Service, and go through it without losing any hint of the experience one gets at the Truck; if anything, they’ve added more to and enhanced it. I am so happy for their success in this venture, and wish them all the best luck in the future. Can’t wait to visit sometime soon when I’m in the area. 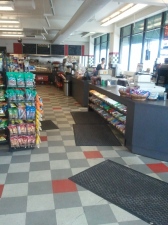 On a side note, I would like to make mention of the convenience store they share the building with. It’s a pretty cool little store, and they have some nice items. Like a mentioned, they actually offer the Mexican, all-sugar sodas (Coke too), and on the way out me and the cousin spotted my favorite Italian ice cream, Talenti. Didn’t get a full review, but I’m sure one can find some more interesting items, as well as a Deli counter that I’m sure is anything but low quality. 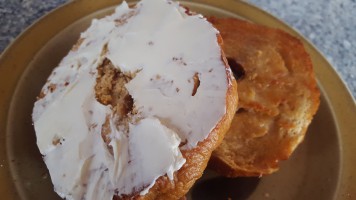 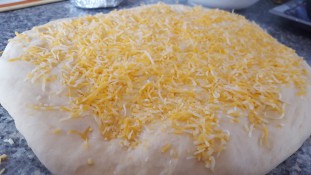 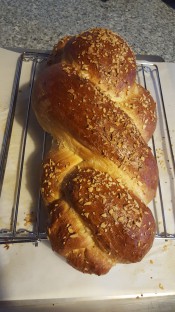 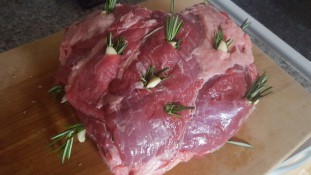