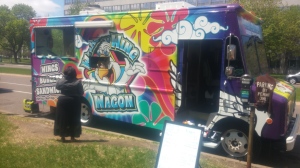 I’ve sadly had yet to get the right day or chance to actually head down to the capital for one of the food truck lunches held there, though hearing about it as a new regular and popular hotspot for it starting last year (if I’m correct it used to be timed for a few rallies/events, and now just any ol’ pretty day). Indicative of that, there was yet another truck that I was becoming quite worried in being able to hit, having found difficulty staying in touch with their social media updates and the fact that most of the ones I DID see were at some of the more random and not-so-familiar places (aka, an event or out-of-area business). Thus I can say I was quite thrilled on one of my now very-open mornings/early afternoons before work, which had some beautifully sunny but mild weather, that I saw there were a few trucks out in front of the big white building. So I took the opportunity to go down and hit not just one but TWO new trucks on my radar (the other review should be coming soon), and here we are!

I will say that the parking and driving situation near the capital was annoying… but that’s not what these posts are about (doesn’t seem to stop my bitching on other things though does it?). We’re talking food trucks, and today I got to hit one of MY most anticipated new businesses on the street, Wacky Wing Wagon.

What else do I need to say that their name already doesn’t? They sell Wings, their design is Wacky, and they’re a Wag… well, okay they’re a Truck, so you can ignore that part, but two out of three is still good right? And I like the truck, it’s interesting… and I’m not just talking about the wrap job done on it, with the whole ‘chicken wings instead of flames’ dealy. Not sure how well you can see, but the window set-up and placement is quite unique, very  ‘non-standard’ compared to practically every other kind of truck/trailer found on the street, what with the glass-covered display window and the little sliding eye-level hatch in the middle for taking and delivering orders. Which I just HAD to ask them about, it get me curious as to whether this used to be a different kind of truck that was re-fitted for food service, or if it was all custom. 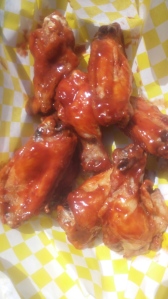 Apparently it’s custom, made in Arizona I think he said (or Atlanta), which… apparently requires that all trucks be made with a bullet-proof glass window. So that explains THAT part of it, haha.

But back to the food, WWW specializes in, what else, Fried Chicken Wings (or Boneless, which I always loved as a kid with KFC’s Honey-BBQ. Mmmmm empty calories…), which one can get covered in classic Buffalo Hot Sauce, BBQ, or Jerk (Caribbean flavor mon). Besides these, one also has the option of a Chicken Sandwich, with the same sauce possibilities for flavoring, or Burger with a variety of toppings/styles (like the Pretzel Bun and Bacon Jam, not sure if it’s seasonal or not). There are of course Fries for side options.

And that’s about it. I’ve got nothing else to say and feeling too lazy to try to think up anything deeper, so onto the food and stuff! (I feel like I end a lot of these intro parts similarly, is it getting boring and annoying?)

As tempting as it was, I REALLY wanted to try that bacon jam, the burgers were skipped, because gosh darnit this is a chicken truck and we need to go for chicken! I don’t understand why so many of them keep adding a burger options (I know, I know, ‘cuz people buy them, which is their own fault). It did look rather decent though, so for repeat customers to WWW who wanna try a burger, go for it. Also, though I didn’t have the chance to try them (if I was only doing one truck that day, I might have), but the fries actually looked very appealing to me. Thicker cut, golden, skins, crispy outside look, those seem to be the nice craveable kind that hits the spot.

But let’s talk about what I DID have. Since I was able to get the same sauce options for both, I went ahead and grabbed both a Wing basket (bone-in of course, gotta set the standard) and a Chicken Sanwich. Hot from the friar, the wing skin kept that fried crunch we look for, even when thoroughly doused in the sauce of choice. The meat inside was moist and tender, as desired, and what’s best is it wasn’t greasy. Now I can’t really say I’m that great at telling the difference in quality between different fried chickens, either wings or other, so I can’t properly judge. In hindsight, though, I am wondering IF some more seasoning on the wings beforehand would have helped? The sauce could have maybe used some extra (I’ll talk about those in a bit though).

Chicken sandwich… grilled delight. Oh, I still love a good toasted bun, and this one was done nice, with a nice char on the chicken breast (a positive aspect, giving one the option for healthy white meat vs, well, fried skin and some protein), which still contained a juicy and tasty interior. It’s a great option for those who crave the burger flavors but want/need to go a little healthier, with all that nice grill flavor around it. That, the bun, and the sauce contributed the main positive points, as the other generic toppings only added the typical support bases, so don’t look or expect for too much ELSE special about it. As a very simple grilled chicken sandwich, it definitely gets my thumbs up.

Finally, the sauces. I got to try the BBQ (on the wings) and the Classic Buffalo (sandwich). Both of which were nice, typically decent, and obviously handmade, having more of those natural flavors vs the highly generic/mass-produced go-tos. But though the sauce overall meets approval for structure and execution, I find little to truly be excited about, nothing ‘special;’ these are really only just a little better than what one normally would think of for BBQ and hot sauce. Maybe if they had more options I would not mind so much, but if it’s just these two plus Jerk I would hope for something fantastic.

Well it’s chicken wings covered in sauce, you can imagine their factor for this! Overall very walkable, but messy (unless one got plain wings, in which case WHAT’S WRONG WITH YOU!!???), napkins heavily required. Basket-based, the sandwich was an easy one to eat with a free hand, minus maybe a tomato slice falling out (though that may have been a different sandwich I had that day).

8-piece wing basket, every one, is only $7, and $6 for any of the burgers and chicken sandwich, overall it’s a rather damn good deal. The food is pretty simple to back this up, and fries come in at an obvious $2 extra (about average, I’ve seen places charge more, especially for ‘special’ kinds), and again they seem rather decent for the upcharge.

Generally average waiting time for wings to fry and buns/meat to grill on the flattop.

They CURRENTLY only have one friar (or two small ones, can’t remember), which can easily push back wait time once there are multiple orders in the window, having to wait for different batches of wings and fries to finish cooking before another one starts. Wishing them luck on being able to get an extra one soon to help with business!

Distinctive, vibrantly themed with a fun name and, I mean come on those graphics! It’s got those great combination of factors which made me quite excited search them out, then of course sadness at not being able to do so for so long. Though I would say that a distinctive drawback to this occurs upon arriving, likely a combination of that super simple white-board menu and the rather… ‘lacking’ menu. I mean ultimately there’s Burgers, Chicken Sandwich, and the Wings, which is usually more than enough except there are only FOUR types of wings, two of which being Hot Sauce and BBQ (the most generic flavors) and a third just Plain. A big part of me was really hoping to revel in the wings more, have a few more interesting sauce options (you have that Bacon Jam for the burger, why not mix that with something to toss the wings in?) to try for that cult-corner EXPERIENCE of going there? Or something like that… just want that menu to excite me more ya know, get my palette dripping, the first stage of presentation before seeing the actual food. But overall still awesome and fun.

First off, I feel like I want to openly say that I KNOW, I’m aware, that this added bonus or minus section is mostly situational. A lot of the people handling the window are always great, friendly and fantastic, it’s just some situations and people (or seeing repeat business) that it shines more. But I started off with having this section as an official way to reward or critique the trucks who, in my visits, I felt deserved it at that time, and I want to keep honoring that part of myself and this blog.

Which is why I thought it was quite nice that, during the little service lull as our food was being cooked and there was no one else waiting in line, the owner at the window walked out and started chatting, explaining the friar situation and apologizing for it between discussions of weather, food, etc. Even taking the effort to check my sandwich, which had a suspicious string of something which we then realized was just a super-thin onion, haha. It added nicely to the visit for me.

Wings may not be the handiest and cleanest of street food, but if you’re looking for a fun and unique joint to check out then Wacky Wing is the place to go, especially when looking for the lower-priced options. Also great options for food-truck-days/coursed meals as an appetizer visit, or a snack to share with friends between other things.

Any first or single visit simply should constitute an excuse to go for the Wings, Bone-in preferably but I will not judge. Other items should be saved for repeat visits, though I will say that IF one is in the mood for Fries (as-is or to accompany some other truck item), and there isn’t another fry-specialty business nearby a-la Neato’s, this seems to be a strong contender to get them from. As for the wings themselves, go for Jerk; I may not have tried it but I can feel, after having the other two, that it’d easily be the most exciting sauce of the lot, get that full experience.