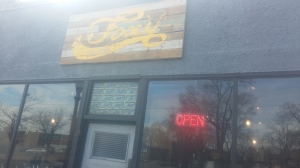 Getting back into the food-adventure swing of things, I’m really hoping to be able to check off some of the close-by Truck-staurants off my list. And lucky me just the other day I finally got to head down to Foxy Falafel’s little café for lunch! 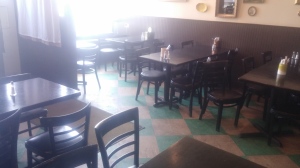 I imagined it’d be bigger, but I don’t mind, love that small little café atmosphere; these sorts of deals really do fit the food truck persona the best, plus they’re probably a bit easier to afford than the bigger stuff! And Foxy’s is situated in a little brick shop just up from University and Raymond, in a setup that almost looks like it used to hold antiques or a yarn-spinner’s directory. Hooray for setting up a place with some personality!

Now, for those reading who still haven’t been there yet (I’m sure I’m the last one, but just in case), the menu is set up in an interesting, fun way. Main entrees are chosen a-la Chipotle, where you pick the ideal protein of choice (3 different falafel flavors, a mix of each, and some actual meat options in style of chicken shwarma, gyro, and lamb), figure out if you want it stuffed in a pita, salad, or ‘platter,’ and which of three delicious sauces you want to top it with. One can then choose to accompany this with one or more of various sides (hummus, beet slaw, baba ganoush, etc), cookies and other dessert.

These can of course be accompanied with some awesome local draft beer, wine, or other drinks. All of which has been drawing up on two very attractive chalk boards! Sadly I wasn’t in the mood for grabbing a refreshment, though I wish I was; they seem to have a very interesting looking Root Beer in their fridge, that always peaks my tastebud curiosity. 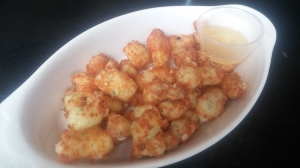 What I DID start off with was a bowl of cheese curds; not what I planned, but seeing them on the menu intrigued me, and I haven’t had any sense the State Fair as it was. And I’m glad, for one thing cuz they’re my favorite style; lightly battered, still warm and gooey with a BIT of grease (but not overly); of course they used amazing local organic curds for it too. They were tossed in Dill before frying, but truth be told I could barely taste that even when looking; I wish they got some fresh dill on it after frying, really bring that fresh flavor in. But oh god, I’m now indebted to the place, because I’ve discovered the wonder that is fresh cheese curds dipped in honey. I’m gonna have to eat them with that every time now.

As for the main, I still gotta order the classic street-foodie pita option (hey, it came with fries); Beet Falafel which I’ve been very much wanting to try since I found out about them a few years back; and the Green Tahini sauce (tahini w/ lemon and herbage). Of course the falafels were good; crunchy outside, VERY tender and soft inside, nice little different flavor with the beets (I’m surprised with how ‘fresh’ it felt, vs the deep earthy flavors I normally attribute), and with the other filling ingredients and sauce it made a nice mouthful.

That said, I’m very glad I was eating this in the café, because that pita did NOT want to stay together! It ripped and tore, fell apart once, and was a bit of a mess even when trying to keep that paper around it. Though, in this setting, I don’t care about that so much, just thought it should be made of note. The tahini was nice, not as vibrant in flavor as I was hoping, but a pleasantly smooth, lightly lemony-herby paste to moisten things up with. It was great with the fries (which were good for soft-style fries, a shame they don’t go for crispy texture on it though). Overall it was a tasty little sandwich lunch, eaten at a time and place that was great for enjoying the good weather day in, and I’m glad I got to go at it again after so long.